Be sure to scroll all the way to the bottom for a giveaway! 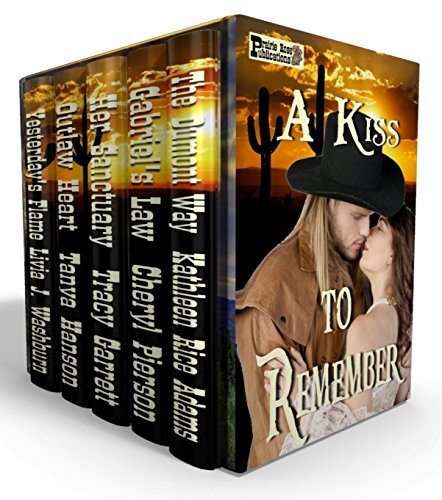 A Kiss to Remember

Are you ready for FIVE books in one of the best western historical romance boxed sets to debut this year? Prairie Rose Publications has got just the stories you’ve been craving! Get ready for some wonderful hours of pleasure-filled reading as you settle back in your easy chair and get lost in these wonderful tales of romance that you won’t be able to get enough of!

HER SANCTUARY by Tracy Garrett
Beautiful Maggie Flanaghan’s heart is broken when her father dies suddenly and the westward bound wagon train moves on without her, leaving her stranded in River’s Bend. But Reverend Kristoph Oltmann discovers the tender beginnings of love as he comforts Maggie, only to find she harbors a secret that could make their relationship impossible.

GABRIEL’S LAW by Cheryl Pierson
Brandon Gabriel is hired by the citizens of Spring Branch to hunt down the notorious Clayton Gang, never suspecting a double-cross. When Allison Taylor rides into town for supplies, she doesn’t expect to be sickened by the sight of a man being beaten to death by a mob—a man she recognizes from her past. Spring Branch’s upstanding citizens gather round to see a murder, but everything changes with the click of a gun—and GABRIEL’S LAW.

OUTLAW HEART by Tanya Hanson
Making a new start has never been harder! Bronx Sanderson is determined to leave his old outlaw ways behind and become a decent man. Lila Brewster is certain that her destiny lies in keeping her late husband’s dream alive—a mission house for the down-and-out of Leadville, Colorado. But dreams change when love flares between an angel and a man with an OUTLAW HEART…

YESTERDAY’S FLAME by Livia J. Washburn
When smoke jumper Annabel Lowell’s duties propelled her from San Francisco 2000 back to 1906, she faces one of the worst earthquakes in history. But she also finds the passion of a lifetime in fellow fireman Cole Brady. Now she must choose between a future of certain danger—and a present of certain love—no matter how short-lived it may be… “A timeless and haunting tale of love.”~ The Literary Times

You can buy A Kiss to Remember from Amazon.

There’s an old saying about writing: “It’s easy to write a book. Just sit down and open a vein.”

The advice is meant to be humorous and taken figuratively, but authors sometimes consider a literal interpretation. Unlike like Ernest Hemingway, Sylvia Plath, Hunter S. Thompson, Virginia Woolf, and David Foster Wallace, most of us are not mentally disturbed…usually. However, writing can drive the sanest author over the edge on occasion.

The writing challenges that contribute to temporary insanity are legion and take a variety of forms. Like our stories, “issues” may be plot- or character-driven. No story comes without at least one. Some stories bring along so much baggage, we consider murdering all the characters in one blaze of glory and penning “the end”…at the midpoint.

Here are the challenges the five authors who contributed to the new boxed set A Kiss to Remember faced during our journeys to the happy ending.

I seem to have a recurring theme in my writing—my heroes prefer to remain the tall, handsome, silent type. Hero Kristoph Oltmann was introduced by my characters as a German immigrant, speaking with an accent. That was in Wanted: The Sheriff, an earlier story in the River’s Bend series. Since he was maintaining radio silence for the most part when I started Her Sanctuary, I had to trick him into talking. When I finally succeeded, I discovered he was born in the good old U.S. of A. Not a trace of an accent — unless you counted the bit of a Missouri twang he’d picked up since moving to River’s Bend. That made for some interesting edits. Someday I want to write a book where the hero talks more than the heroine!

My biggest challenge in this story was to not let them fall madly in love with each other too soon. They’d known one another before in the orphanage where they lived as kids. So once they meet again under the circumstances in the book — the old feelings are still there. How was I going to stop them from acting on those feelings right away? Especially since Allison has saved Brandon from certain death? Well, now you have the beginnings of the story. I hope you’ll get the boxed set and enjoy the rest of this tale and all the others that are included!

I had two main challenges, one so severe I told my editor I wasn’t sure I’d be able to finish. We had to rescue my husband’s mother from an elder-abuse situation that all but sucked the breath out of me. Praise God she’s settled and safe and I met the deadline. On a Friday. My computer crashed on Sunday!

You know a story is going to be difficult when the villain is the only character who behaves. Both the hero and the heroine in The Trouble with Honey had their own agendas from the outset — and those agendas led the story in opposite directions. I was forever yanking one or the other back onto the path. When they finally agreed to pursue the same goal, it wasn’t the goal I intended. So, I threw away what I’d written and started over — three times. In the future, I plan to begin each story with a cast meeting during which I’ll make clear that horseplay will get the offender shot and hanged.

Since Yesterday’s Flame is a time-travel story, the biggest challenge was fitting together everything in the past and present so the plot worked out and made sense. Time travel paradoxes can be very tricky!

So, there you have it — five reasons not to take up writing unless you enjoy self-flagellation. Creating fiction can convince the most stalwart soul the cliché “artists must suffer for their craft” is high sarcasm. People often use sarcasm to cover actions and emotions they’d rather not confront. All five of us who contributed to A Kiss to Remember had no choice but to face our demons head-on. Thankfully, the demons suffered defeat…this time.

Cheryl Pierson was born in Duncan, Oklahoma, and grew up in Seminole, Oklahoma. She graduated from the University of Oklahoma, and holds a B.A. in English. She has taught numerous writing classes and workshops over the past years and also works on an individual basis with many of her students, and other authors, locally and nationwide.

A Texan to the bone, Kathleen Rice Adams spends her days chasing news stories and her nights and weekends shooting it out with Wild West desperados. Her short novella “The Second-Best Ranger in Texas” won the 2015 Peacemaker Award for Best Western Short Fiction. Her novel Prodigal Gun won the 2016 EPIC Award for Historical Romance and is the only novel-length western historical romance ever nominated for a Peacemaker.

Under the names Livia J. Washburn and L.J. Washburn, Livia Reasoner has been writing award-winning, critically acclaimed mystery, western, romance, and historical novels for almost thirty years. She began to write in collaboration with her husband, author James Reasoner, and soon branched out into telling her own stories.

In addition to writing, Livia enjoys photography, arts, crafts, and cooking, but she also loves having a pile of lumber, a circular saw, and a building project. An accomplished carpenter, she has framed houses and built more sets of bookshelves than she can remember, some of which have been filled with the books she’s written. A good day for her includes having time to create something new in the kitchen, on a story, and in the garage.

Livia lives in the Texas countryside with her husband, and her dogs. Her websites can be found at http://www.liviajwashburn.com, and she blogs when she can find the time at http://liviajwashburn.blogspot.com.

A native Californian, Tanya Hanson lives on the central coast with her firefighter husband and considers their son and daughter the best thing she’s ever done. After a career teaching high school English, her life is blessed with a happy home, exciting travels, good health, and best of all, two little grandsons. Volunteering at the local horse rescue and recent trips to the Colorado Rockies and Alberta proved to her the West is where she wants to write!

Award-winning author Tracy Garrett has always loved to disappear into the worlds created within the pages of a book. An accomplished musician, Tracy merged her need for creativity, her love of history, and her passion for reading when she began writing western historical romance. An active member of Romance Writers of America and her local romance writers chapter, Tracy now resides in Missouri with her husband and their furry kid, Wrigley.

You can find All these ladies on Facebook! Kathleen Rice Adams, Cheryl Pierson, Tracy Garrett, Livia Washburn, and Tanya Hanson

The authors have generously offered a free ecopy of A Kiss to Remember to one lucky reader. To enter, comment with your favorite western area to read about. Mine is Montana! Good luck!