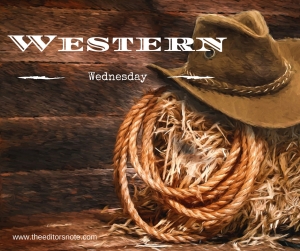 Angela Raines joins me today for Western Wednesday. Scroll to the bottom for a giveaway!

Angela writes novellas, some may even call them novelettes. They read in a nice few hours, but I wasn’t left feeling like I was missing part of the story or who the characters were. It is obviously her calling to fit in this niche and she does it well. Both stories are well-written and I recommend them for anyone looking for a good story but only has a few minutes at a time to devote to the book.

Given a chance at freedom for a crime he didn’t commit, Drew Carson must kill for his pardon. Taken to a lush valley where a beautiful woman lives, Luke, Drew’s “rescuer”, lets him know that the woman is his target–kill her, and he’s a free man. But there’s something strange about the valley. Time stands still, and nothing is as it seems. Will Drew trade murder for love?

You can buy Angel of Salvation Valley from Amazon.

Clara Cross ran away as a young girl after the suspicious deaths of her parents, and has spent the last nine years trying to find safety from a man she had reason to fear. Finally landing in the small town of Agate Gulch in the high Colorado mountains, she believes she may have found a safe home at last, and can send for the brother she had to leave behind. Sam Tower is the man she loves—but would he ever give her a second glance? When Clara’s past catches up with her, her survival depends on her own strength and courage, as well as Sam’s.

Sam Tower runs on a ranch with his friend, Paul Ward, near Agate Gulch. Sam has been running from the past since the loss of his family, and the injury he received as a fife and drum boy in the Civil War. Clara is everything he admires and loves—but she is too good a person for him. When Clara is kidnapped, Sam begins a journey of discovery and finds what he’s always wanted—a HOME FOR HIS HEART.You can buy Home For His Heart from Amazon.

Angel of Salvation Valley: I wasn’t sure where this story was headed at first, but that is a good thing. I knew it was romance and that was all I really needed to know. I loved how both characters came together in this story and how they grew, even in such a short time. I really enjoyed the spiritual warfare within the story and the pets are a wonderful addition.

A Home for His Heart: The west was a tough place to call home, you had to love it or it would eat you up and spit you out, especially if you already have a past chasing after you. The hero and heroine in this story both come from tormented pasts that cloud how they see today. I love how the real-life issue of self-depreciation can so accurately play out in both this time and today, giving us a lesson without being preachy.

Angela Raines is the pen name for Doris McCraw. Originally from the mid-west, Doris now calls the Rocky Mountains her home. Doris is a writer, historian, actor,and teacher. An avid reader, Doris loves to spend time in history archives looking for the small, unknown pieces of history. Many times these pieces end up in her stories or poems.

Currently, Doris is working in both the Medieval and Western Romance genre. Both have a wonderful history, much not commonly known which adds to the joy of telling these stories.

A photographer, Doris also writes haiku and combines them with her photography on her haiku blog: http://fivesevenfivepage.blogspot.com

You can find Angela on Facebook! Angela Raines or by email: angelarainesauthor@gmail.com

For a chance to win a copy of Home for His Heart, tell us what type of novels you like to read, novelette, novella, novel, or epic novel…or maybe all of the above! Winner announced next Wednesday!

There is some mild language in Home for His Heart.