Be sure to read all the way to the bottom for a chance to win! 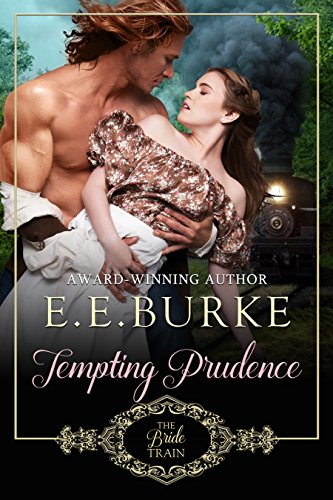 A spinster, a bootlegger… an unexpected chance at love.

Leaving the safety of her old life, Prudence Walker rides the Bride Train west to the end of the line…her last chance at matrimony. She’s too plain to inspire desire. Nor does she expect to find love. However, she does have her standards.

Arch Childers longs to put down roots, only he’s too busy managing his family’s illegal whiskey business to pursue his dreams. Deciding he needs help, his troublemaking brothers kidnap a spinster lady and present her, bound and gagged, as his bride. Knowing her reputation will be ruined, he does the only honorable thing and offers marriage.

Prudence isn’t immune to the scoundrel’s charm, but a conniving bootlegger is the last man on earth she would marry. That is, until Arch sacrifices his freedom to save her…

You can buy Tempting Prudence from Amazon.

Prudence blinked. A flash of blue sky, a scowling, bearded face…and then she was hauled out of the coffin, passed from one set of rough hands to the next. Her limbs hung numb and useless. She could resist no more than a rag doll.

The bearded giant grabbed her hair, tore off the snood and fished out the pins. Still gagged, she moaned in protest as her unbound hair tumbled down her back and into her face. “That’s better… Get her loose.”

The burly man untied the binding around her ankles and released her wrists. She still couldn’t feel her hands and feet and would’ve collapsed had someone not been holding her up. “We don’t need this no more.” The ginger-haired accomplice untied the gag. “You can scream all you want. Nobody to hear you. Except us.”

Scream? She couldn’t produce a sound through her dry throat.

The wagon had come to a stop in a clearing about a stone’s throw from a small dwelling sided with unpainted clapboard that might’ve been shipped in by rail.

Beside the open doorway, a red coonhound barked. Behind the house, a timbered area would indicate the presence of water, possibly a stream. Railroads tracks were laid near water, weren’t they?

She frantically scanned the landscape, praying she would recognize something, a landmark, anything that might help her find her way back after she managed to escape.

The sun hung low in the sky. That direction was west…and out there was nothing but a sea of tall grass, undulating like waves. She had no idea where she might be, or which way she ought to run, or if she could run.

Feeling returned to her limbs with a vengeance. She flexed her fingers to speed the painful process. Her rubbery legs threatened to give way. She didn’t have the strength to wrench away from the bearded man’s grip. She was at the mercy of three brigands whose plans seemed abundantly clear. They’d brought her to this lonely place to ravish her and would likely kill her afterwards.

The air smelled fresh, like newly mown hay. But being able to breathe freely didn’t calm the sick churning in her stomach. Weakened, unable to hold back the nausea, she leaned over and vomited on the trampled grass.

With a grimace, the ginger-haired abductor held out the handkerchief he’d used to gag her. “You almost got my shoes.”

“Won’t make you smell any worse,” cracked the bearded man, who held her arms fast. If he released her, she would run. Even if she fell on her face, it was better than accepting her fate.

The shorter, heavyset man ambled toward the cabin. “Arch! Git out here…we brung you a present.”

Dear God. They planned on passing her around?

A man’s figure darkened the doorway. His shoulders filled the framed-in entrance. Her heart accelerated as he emerged, half-dressed, his chest bare as a savage’s. Suspenders dangled on either side of his legs from the waistband of worn denims. He threaded his fingers through shoulder-length hair the color of a tarnished penny. He stared at her with a fierce scowl.

Prudence tasted fear. The metallic essence that filled her mouth also seemed to permeate her bones and muscles, rendering her paralyzed. Four strapping males, and this last one appeared to be half-wild. How could she hope to fight, or escape? She was doomed.

The man behind her tightened his grip, keeping her upright, holding her out like a prize. “Come meet yore new bride!”

This is the first of the Bride train series that I’ve read and it won’t be my last (and I didn’t feel as if I was missing part of the story). I love how you are curious about Pru from the very first page and what her plight will be. You will connect with her and her insecurities, then Arch waltzes into the story and the tension begins. That is the best part of the whole novel. EE Burke writes tension so very well and that is the fundamental basis of a good romance. This novel has a heaping helping and will leave you unable to put it down. The characters are well-written and have a great depth, the story-line stays true, but even a good story without that tension wouldn’t be half the story this is.

I received this novel free in exchange for an honest review.

Historical Tidbit from researching the novel:

The mail-order bride phenomenon in 19th century America spawned personal advertisements, matrimonial newspapers and matchmaking services, and even the railroads wanted a piece of the action.

My new series, The Bride Train, is inspired by true events. In 1869-70, violent riots broke out in southeastern Kansas in protest of railroad land policies. Troops were sent in by President Grant to quell the violence. Another more peaceful solution proposed was a program for the immigration of single young women to become brides for the settlers and provide a calming influence. I couldn’t find evidence of whether this program ever got off the ground, but what a great romance series idea! 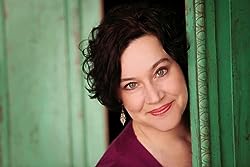 Weave together passionate romance and rich historical detail, add a dash of suspense, and you have books by bestselling author E.E. Burke. Her chosen settings are the American West, and her current series, The Bride Train, follows seven brides as they journey West to a land plagued by violence and unrest. Her writing has earned accolades in regional and national contests, including the prestigious Golden Heart®. Over the years, she’s been a disc jockey, a journalist and an advertising executive, before finally getting around to living the dream…writing stories readers can get lost in.

You can find Ms. Burke on Facebook! Author EE Burke

Click link below photo to go to the Rafflecopter page. This giveaway is sponsored by the author. Good luck!