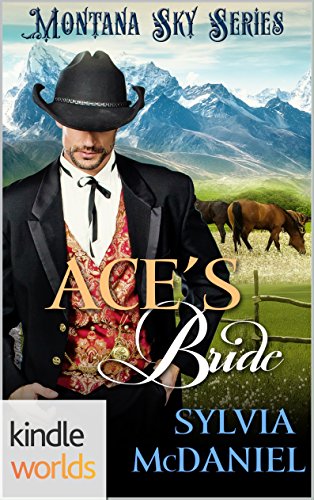 The Past Collides With the Future Creating Mail-Order Bride Sparks

After being gone for years, Mick ‘Ace’ Anderson ordered himself a mail-order bride and returned home to Morgan’s Crossing, Montana. But everything has changed at home. His reason for ordering himself a bride is dead, his brother and father have both remarried and Mick is hiding his alter ego, Ace, the gambler from his family. If things couldn’t get worse, his mail-order bride is right out of the past he’s trying to keep hidden.

Emily Black, or Lady Melody as she’s known in the saloon, is running from a much too ambitious fan who wants to make her his own caged singing bird. Realizing the only way to escape her over zealous suitor is to become unavailable, she signs up with a mail-order bride agency. But imagine her surprise when the man who lifts the veil at her wedding is non other than the attractive gambler in the saloon where Lady Melody sang.

Hiding from the past, can Mick and Emily start fresh or will the demons from the River Bottom Saloon follow them to Montana? And can the attraction they denied in Kansas City overcome their distrust and bring them together forever?

“I’m going to be late to my own wedding,” Mick ‘Ace’ Anderson said as he urged the horses faster down the rough road that led to Sweetwater Springs, Montana.
“There’s no sense in killing all of us driving this way,” his father Cal replied as he wrapped his arm around his wife, Edwina, to protect her from the jolting, speeding wagon. “There is no way we’re going to make it to the church on time.”
“I’m not going to have my new bride thinking I’ve stood her up at the altar,” Mick replied, urging the horses on, his stomach clenched in a knot. He was marrying a woman he’d never met and now a broken spoke on the wagon wheel had almost derailed the wedding.
“I’m sure Mrs. Norton will reassure her,” Faith Anderson said, his new sister-in-law who had recently married his brother Trent.. “Things happen and she’ll make her feel at home until we arrive.”
“If we make it,” his new stepmother Edwina said sarcastically. So much had happened in the years he’d been gone from the family he loved.
“I just can’t believe that we’re attending another wedding. The third Anderson wedding in three months.”
“Well, technically, two weddings since we had a double ring ceremony,” his brother replied. “Are you ready to marry someone you don’t know.”
“Yep,” he responded knowing he wanted this woman to keep him from returning to the life he’d left behind. Hoping that he wasn’t marrying a woman like Beth, his brother’s lascivious first wife.

Ace’s Bride is my first experience with Kindle Worlds and for those who haven’t read one yet, you should give it a try. At no point did I feel like I was missing part of a bigger picture within a series. Even though this seems to be a series within a series, I was able to read the whole thing as a stand-alone.

Ace’s Bride is a story set in the wilds of Montana on the brink of winter. Both Ace and Emily are hesitant about their new union and not for the usual Mail-Order-Bride reasons. Both have secrets that almost come to the fore with the very first kiss!

This was an exciting quick read that will leave you wondering if these two will make it. You’ll just have to read it to see if they do.

To enter to win an ecopy of Ace’s Bride, comment on this post. Have you ever read a Kindle Worlds book or any of Sylivia’s other novels?