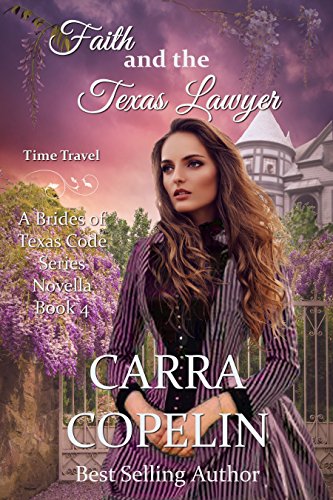 Faith and the Texas Lawyer

Faith Daniels has had a hard time fitting in all her life, from the time she was left on the steps of a firehouse to her recent divorce. The only time she feels connected is when she rehabs old houses. Often she wishes she could have experienced life in a simpler time. Her current project, a 1900 Galveston mansion, is all she ever wished for and more. When some mysterious force transports her from 2016 to 1900, just prior to the most devastating natural disaster on record, will Faith give up all she has attained in her present life to stay in the past with the sexy turn-of-the- century lawyer?

Joseph Benning has serious trust issues. He is still recovering from the jolt of being dumped by his fiancé shortly before their wedding. In order to prove to himself he can manage on his own without a woman in his life, he decides to reach outside of his routine and buy a house. Suddenly, a strange woman shows up inside his house telling fantastic stories of disaster and destruction. Will Joe be able to make the right decision and let her go, when it comes time to save her life?

While the cover of Faith and the Texas Lawyer says sweet, the inside is certainly more spicy. Lovers of time travel romance will appreciate that there is roughly equal time given to past and present, though Faith is certainly a fish out of water, so even the historical parts have a contemporary feel to them. Readers who don’t normally enjoy a historical novel might find they really like this one.

For anyone looking for a story on the Galveston Hurricane of 1900, this is a light read that will give you some feeling of that time.

Carra Copelin is an award winning and Amazon Best Selling Author. She writes contemporary and historical romances but, unlike so many other authors, didn’t write from childhood or read long into the night beneath the covers with a flashlight. She found romance novels as an adult. After reading about a million, she discovered numerous people residing in her head, all looking for a way onto the printed page. She’s a member of Romance Writers of America and Past President of Yellow Rose Romance Writers, plus she regularly contributes to romance blogs, Sweethearts of the West and Smart Girls Read Romance. She is a member of The Daughters of the American Revolution and The Daughters of the Republic of Texas. Carra and her hero live in North Central Texas, in the Dallas-Fort Worth Metroplex where they enjoy family and their three beautiful grandchildren. In addition to writing and researching with her fabulous critique partners, she enjoys her Bridge group, crochet, and tracking down relatives through genealogy.

To enter to win an ecopy of Faith and the Texas Lawyer, leave me a comment below. Do you like watching television shows or reading books about weather related disasters?

The 38,000 residents of Galveston, Texas were unaware that this day would be their city’s last. They had no idea that before the day was done, 8,000 of their fellow citizens would perish with the city. The culprit was a hurricane. The storm swept in off the Gulf of Mexico packing winds up to 135 mph – a category 4 storm in modern terminology. The storm propelled a fifteen-foot surge of water before it; easily swamping the 8.7-foot-high island that Galveston called home. Together, the wind and the water destroyed everything in their path and created the worst natural disaster in America’s history.
Galveston, Texas – For locals, any reference to “the storm” is obvious. If someone says a house survived the storm, there is no doubt it predates Sept. 8, 1900.
If people say they had family who died or survived the storm, there is no doubt that they are referring to a family history that goes back more than 100 years.

For in Galveston, “the storm” always refers to the hurricane that tore across Galveston on Sept. 8, 1900, and left the city in ruins.

20 thoughts on “Western Wednesday: Faith and the Texas Lawyer ~ Carra Copelin plus giveaway”