How did you get started writing?

I’ve always written, ever since I was a young child. It’s always been a compulsion for me. But I didn’t get serious until I was a stay-at-home with four rowdy youngins’.

How much research goes into your books, and how do you tackle that?

Since I enjoy research so much I can’t say if I do too much or too little. Over the years, however, I’ve gotten better at it—I don’t waste a lot of time investigating useless avenues. When I wrote THE WREN I read an entire book on the history of Texas. Needless to say, I was overwhelmed with too much info. These days I begin with a preliminary pass on setting and general history of an area before writing anything. After the first draft, I do specific research based on the needs of the story.

In your newest release, THE BLUEBIRD, what sets your heroine Molly Rose Simms apart from all the other women in your Jake McKenna’s life? Why is she perfect for him?

Molly Rose is a dreamer, but she’s never gone anywhere. Because Jake is an adventurer, she’s naturally drawn to him. In her, he sees the one thing he’s traveled the world to find—a sense of awe and wonder.

Can you give us a little background on your hero Jake McKenna that’s only in your author notes and not found in your story? What inspired you to create this character?

My initial impression of Jake was happy-go-lucky. The first 4 novels in my Wings of the West series were serious and heavy in the plotlines, so I really wanted to make this novel fun and adventurous. Jake has evolved into a worldly man, having traveled to far off places. I read a lot of historical memoirs and they helped to shape his character.

Many years ago I attended a writing conference for Romance Writer’s of America. I happened to sit beside a very nice author (I wish I could remember her name) and when we got to chatting, she said something that’s always stuck with me. “I don’t worry about that other stuff. I just write.” That ‘other stuff’ to which she referred was social media, marketing, etc. I don’t think you can completely ignore those aspects of the book business, but at the end of the day the writing is the most important thing. 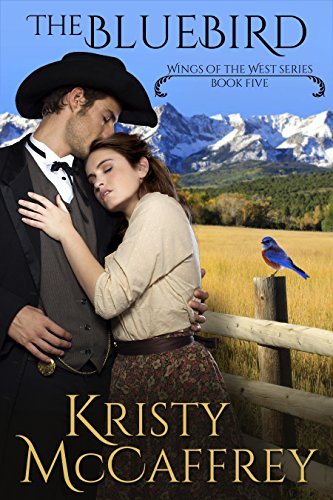 Now Available on Amazon or read for FREE in Kindle Unlimited.

99 cents for a limited time.

Can be read as a stand-alone novel.

Molly Rose Simms departs the Arizona Territory, eager for adventure, and travels to Colorado to visit her brother. Robert left two years ago to make his fortune in the booming silver town of Creede, and now Molly Rose hopes to convince him to accompany her to San Francisco, New York City, or even Europe. But Robert is nowhere to be found. All Molly Rose finds is his partner, a mysterious man known as The Jackal.

Jake McKenna has traveled the bustling streets of Istanbul, exotic ports in China, and the deserts of Morocco. His restless desire to explore has been the only constant in his life. When his search for the elusive and mythical Bluebird mining claim lands him a new partner, he must decide how far he’ll go to protect the stunning young woman who’s clearly in over her head. A home and hearth has never been on The Jackal’s agenda, but Molly Rose Simms is about to change his world in every conceivable way.

That evening, Jake sat on the edge of the cot that would remain empty tonight while Boom and Molly sat at the table. They ate a potato and beef stew, along with more thin biscuits that Molly had prepared.

“Why are you called Boom?” Molly asked. “Is that your real name?”

“Did you come all the way from Russia?” she asked, an awestruck look on her face.

Jake was about to mention that he’d been to Russia but instead shoved another spoonful of food into his mouth.

Boom nodded. “I did. It was some years ago. I’m from a town called Kislovodsk, at the base of the mighty Mt. Elbrus, a place not much different than here. I struck out to America to find my fortune.”

“And have you found that fortune?” Molly inquired.

Boom gave a hearty laugh. “Some, but I can always use more. I’d like to take a wife soon—”

Jake coughed loudly and stood, reaching for another biscuit from the table.

“Are you all right?” Molly pinned her gaze on Jake, concern etching her face, and her blue-green eyes watching him like deep pools of jade.

He pounded a fist on his chest twice. “I’m good.”

She turned her attention back to the Russian who, unbeknownst to her, was attempting to woo her. “Do you have a woman you fancy?”

“It’s funny you should ask—”

Jake dropped his tin cup. The crash startled everyone and sent coffee across the floor.

Molly jumped up and grabbed a rag then knelt before him to clean the mess. He retrieved his cup, bumping into her shoulder as he did.

She glanced up at him. “I hope you’re not becoming ill.”

“Just clumsy,” he muttered and shrugged.

“If someone asked me to describe you, that wouldn’t be it.” Her eyes caught his and for a moment he held her gaze, warmed by the compliment she seemed to be paying him. Confusion played across her face and she broke the contact. She stood and set the rag on the kitchen counter then returned to her meal. “You never told me how you got the nickname ‘Boom’,” she said to Boris.

He chuckled and scratched his chin. “Well, I’m very handy with dynamite.” His eyes flashed as his hands mimicked an explosion. “Ka-boom.”

Molly tensed. “That sounds dangerous. Does Robert use a lot of dynamite?”

“Nah,” Jake cut in. “Hardly at all.” It wasn’t entirely true, but there was no reason to needlessly worry her. “We can find a lot of claims by digging and picking.”

She nodded, but he could tell she wasn’t entirely convinced.

“Why are you called The Jackal?” she asked.

“He looks like one, don’t he?” Boom said, slapping Jake on the shoulder.

“Thanks.” Jake ran his spoon around his bowl to scoop up a few potato pieces stuck to the side. He swallowed the last of his meal and wiped the back of his hand across his face in case he’d been sloppy. For some reason, Molly Rose Simms rattled him.

“I was in a caravan heading out of Marrakech and into the Sahara,” he said.

“We had just come through the High Atlas Mountains when a sandstorm hit. Somehow, in the confusion, I got separated from everyone. When the dust finally cleared, I was on my own.”

“I headed in the wrong direction, and the search party couldn’t find me. In the end, I was on my own for over a fortnight.”

“How did you survive?”

“The jackals. There was a band I came across, and I started shadowing them. I managed to occasionally steal some of their kills, and they knew where water could be found. By the time the caravan found me, the other men claimed I’d become one of the critters.”

“The animals accepted you?”

“I wouldn’t quite phrase it that way. They’d come to tolerate me.”

“So you’re a tolerable jackal,” she teased.

“Most of the time,” he murmured, enjoying the look of bemusement in her sea-green eyes.

Kristy McCaffrey has been writing since she was very young, but it wasn’t until she was a stay-at-home mom that she considered becoming published. She’s the author of several historical western romances, all set in the American southwest. She lives in the Arizona desert with her husband, two chocolate labs, and whichever of their four teenaged children happen to be in residence. She loves to travel and frequently blogs about her adventures.

Kristy is generously offering an ebook copy of The Bluebird to one lucky reader! Comment below with your email address (like this to avoid spam:  kari_trumbo @ emailgenerator . com) Thank you and good luck!