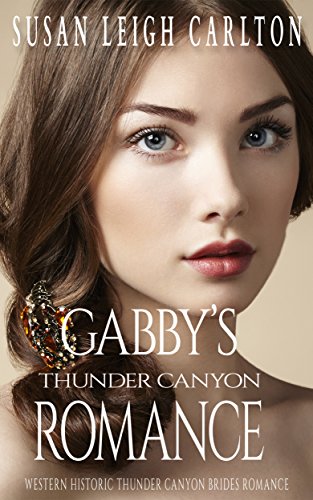 Gabriela Polinski’s father died a hard, and painful death, the result of his years in the West Virginia coal mines. When he passed, she left Wooten’s Hollow as soon as she could.
Wade Gentry was a hard-nosed trail boss from Comanche Wells, Texas. Jonas Parsons hired him to drive his herd from Texas to Montana. He offered him the job as Thunder Canyon Ranch foreman. An offer Wade couldn’t refuse.
Can Gabby find happiness and romance as a mail order bride in the wilds of Montana?
Can Wade, a quiet cowboy, always a loner, give up that life and find happiness with the lovely coal miner’s daughter?

You can buy Romance in Thunder Canyon from Amazon or free on Kindle Unlimited.

The kitchen had been cleaned and Pearlie May had gone to her quarters. Wade and Gabriela sat at the table and talked. “I didn’t use all of the money you sent, so I need to return what was left,” Gabriela said.

“Do you want me to go back?” she asked, her voice quavering.

“No, I want you to stay. Curly asked me how long you were going to stay. I told him I hoped forever. He asked

when I would know. I told him it was your decision to make.”

“Who is this Curly?”

“He’s my right hand and my best friend.”

“You can tell Curly I don’t plan on going anywhere,”

Gabby’s Thunder Canyon Romance is the second novel in the Thunder Canyon Brides series. Appealing characters and a beautiful setting are just a few things I liked about this sequel. We are back on the Thunder Canyon ranch in Montana for the story of  Wade, a quiet cowboy, who is plucked from his quiet job and is offered the foreman title and now that he isn’t a cowboy, can he settle down with Gabby and be happy?

I recommend this novel especially during this hectic season where you may only get a few minutes at a time to read. It is set up in brief snippets that not only propel the action, but make it easy to pick up and put down as needed.

I received this book free for an honest review, which I have given.

Susan Leigh Carlton lives just outside Tomball, Texas, a suburb twenty-six miles northwest of Houston. She began writing and publishing on Amazon in August of 2012.
Susan observed the eighty-second anniversary of her birth on April 17th. She says, I quit having birthdays, because they are depressing. Susan and her husband celebrated their fiftieth wedding anniversary on April 16th, 2016, the day before her birthday.

You can find Susan on Facebook! Susan Leigh Carlton